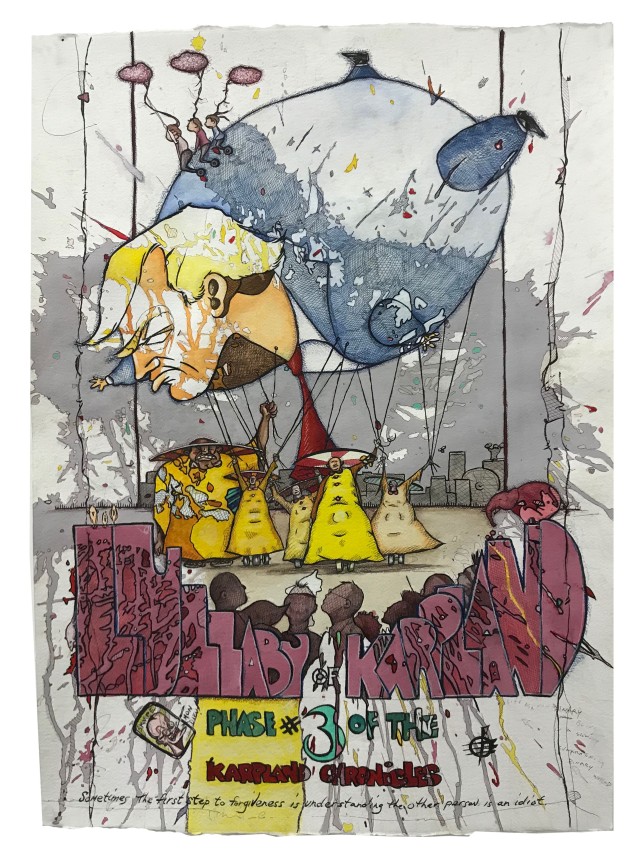 YES!!! Finally I got it together and produced the third version of the Karpland Chronicles. It’s available through Amazon or you can contact me directly. Lullaby follows the Karpland story and creation of the book as it developed over the three month ESKFF residency over at MANA Contemporary.

Right now I am developing another project concerning Extinction. Pairing up again with Nicelle Davis for another motion graphic and exhibition. We are in the process of writing a few grants. Hopefully by the spring we will know if and when the money will be coming in. I’m excited about this project. I think we are onto something great.

In the meantime, I’ve been reading about the Banksy auction spectacle. I think it was a brilliant move on his part. First it appeared as a fuck you, then it turned into reinventing himself. Funny thing about this high end art market. Reminds of the emperor’s new clothes.

So again, stay tuned…there is a lot more coming and a lot more to complain about.

Fine artist, Illustrator and author of The Karpland Chronicles. Professor Pratt Institute and Bloomfield College. Motion graphic collaborations with poet Nicelle Davis include: Commit to Memory: The Precipice of Extinction, In The Circus Of You, Becoming Judas and The Poster Reads; ACTIVE SHOOTER EVENT, travel the video poetry festival circuit. See resume at https://www.cherylgross.net for other accomplishments.
View all posts by cherylgross →
This entry was posted in Science Fiction. Bookmark the permalink.